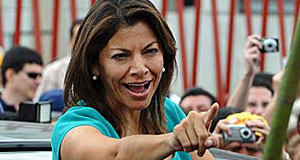 By Luke BujarskiCosta Rica’s system of free trade zones may not be “free” for much longer, if a controversial tax on products and services exporters gets bundled into the government’s latest deficit reduction plan. While local authorities, including President Laura Chinchilla, confirmed with Nearshore Americas that the new tax proposal would not affect existing companies, many are worried that a change to current policy would rock the proverbial boat, and send mixed signals to an otherwise bullish foreign investment community. NSAM also notes that a policy which favors existing companies over new entrants could open the door for hostilities between the public and private sector.

The free zone regime – aka the “zona franca,” is a federal law granting both foreign and domestic companies tax breaks in exchange for new investment, growth in exports, and jobs creation. This incentive structure has been instrumental in attracting global services giants like Dell, IBM,  Telefónica, Stream, and Concentrix to Costa Rica, which have enjoyed generous exemptions on import duties, a zero percent income tax rate, and a zero percent tax rate on dividends.

Not surprisingly, when PAC, the main opposition party to the Chinchilla administration, made legislative concessions in exchange for a tax increase on new zona franca members, Costa Rica’s investment and export promotion community moved aggressively to counter the proposal.

Specifically, the new tax would increase the corporate dividends rate from zero to 15 percent, and would include an annual municipal tax capped at $100,000. When we spoke to Irene Arguedas, Director of the Ministry of Foreign Trade, she stressed that the dividends tax would only affect companies joining the regime after 2015. But when asked about the municipal tax and whether it would affect existing companies, Arguedas said that “this proposal is new and that the exact details are still being worked out.”

A system where some companies are taxed, while others are not, could prove to be an awkward policy that creates additional red tape and a double standard based on grandfathered rate agreements, explained Rafael Gonzalez, Partner at Deloitte Costa Rica tax advisory practice. Gonzalez also stressed that, “while this new proposal is meant to affect only those companies entering after 2015, the change will likely burden existing firms indirectly and in varying degrees, particularly for those looking to reapply for tax breaks after the 12-year expiration date.”

Likewise, considering that the minimum initial investment to participate in the zona franca is $150,000, the new $100,000 municipal tax could place a particularly heavy burden on small-to-medium sized companies.

In the case of Costa Rica, the proposed tax increase is in clear conflict with the country’s ambitious foreign investment agenda

In a closed-door press conference with President Chinchilla during her visit to New York in September, there was notable disagreement between the President and top foreign investment officials including Jose Rossi of CINDE and Anabel Gonzalez the Minister of Commerce (Comex). The President explained that her main priority is to work with PAC and congress, to pass a fiscal plan that would effectively balance the country’s growing budget deficit. “We want to find the least impactful solution, but when a country faces a deficit like ours (5 percent of GDP), we have to start making some sacrifices.” (In an ironic twist, it was the President herself who emphasized the need to reduce bureaucratic redtape in global services in this exclusive NSAM interview last year.)

During the meeting, Rossi’s was upfront about his stance on this issue and stated that, “we have an obvious difference of opinion and respect the government’s approach, but we believe that any changes to the free zone regime would send mixed messages to the investment community.” Minister Gonzalez from Comex also reminded the press corps that foreign companies today fill almost 60,000 jobs directly, and create many more indirect jobs.

While not a done deal, there are signs that the proposal is being taken quite seriously. Last Friday, former President Oscar Arias addressed congress asking members to drop the tax proposal. Likewise, PROCOMER, Cost Rica’s export promotion agency published a detailed study just last week, on the economic benefits of the zona franca regime. While there was no direct mention of the proposed tax increase, we speculate that the study’s timely release was coordinated in line with the current debate.

» For every $1 dollar exonerated, $8 in jobs and investment are created

Additional Public Spending Needed, But There Are Alternative Sources

This debate carries bigger lessons on a country’s fiscal and economic health, and how it can affect the broader investment climate. In the case of Costa Rica, the proposed tax increase is in clear conflict with the country’s ambitious foreign investment agenda. Since 1986, investment promotion group CINDE has attracted more than 200 companies, and aims to reign in an additional $10 billion in new investments between 2010 and 2014. In the press conference, CINDE director Jose Rossi also explained that “communicating a favorable and consistent tax policy will be critical to achieving this goal.”

With growing foreign investment, new corporate dollars will have to be matched with new local revenues, particularly for physical infrastructure and education spending. Roberto Gallardo, Minister of Communications for the current Chinchilla administration told us that Costa Rica’s current fiscal woes are due largely in part to increased spending intended to stabilize the economy after the 2008 global financial crisis. “Our economy is tied closely to the global economy and we’ve made considerable investments on recapitalizing banks and creating public sector jobs.”

Mr. Gallardo also noted that Costa Rica is determined not to make cuts in public spending during the global recession, particularly in education. And while Costa Rica’s budget is strained, changing the tax policy on the zona franca regime is “not the only way to go,” he explained. “We are also doing a better job with tax collection and are working to lower administrative costs.”

Knowing When to Say “When”

An anonymous source also suggested that a tax on new companies could indirectly benefit Costa Rica’s existing global services industry. As with other Central American economies, Costa Rica has a relatively small labor pool, which makes it particularly vulnerable to wage inflation. So a tax on new companies would, at least in theory, discourage additional firms from pushing their way into an already tight labor market. Fewer new entrants could also give the public and private sector more time to train skilled workers and to invest in productivity, instead of recruitment and retraining costs.

Ultimately, a fair and consistent tax policy seems to make the most sense in the long term. Regardless of whether taxes are raised or lowered, they should apply evenly and routinely across all zona franca members. Offering special treatment to existing firms could cause a rift between the government and new investors on future policymaking and economic planning. Likewise, giving local authorities the power to haggle with individual companies on an annual basis opens the door for corruption and uncertainty around year-to-year tax obligations.

What direction Costa Rica and the Chinchilla administration goes should be made known by early January of next year.