Indra Sistemas has won a $10.3 million contract in Chile, which will see the Spanish technology giant upgrade and streamline information and communications systems at the Port of Valparaiso, one of the biggest seaports in South America.

In a press release posted on its site, Indra clarified that the deal is an extension of the contract it signed in 2010 with Chile’s state-owned port firm EPV (Empresa Portuaria Valparaíso).

The contract includes developing new features and expanding the scope of the solution it implemented in 2007, Indra said, adding that it will also perform systems maintenance and operations for another five years.

The Spanish firm is carrying out other similar projects in the region, including Panama. Indra’s presence in Latin America widened rapidly after it acquired a 100% holding in Politec, one of the most prominent IT companies in Brazil.

Under the deal, Indra will also set up an online marketplace that Chilean businesses can use to hire logistic services. The contract will also see Indra deploy several technology platforms so that EPV can better manage the port and reduce the amount of carbon its operation is generating in the city of Valparaíso.

Under a different contract signed with the Chile’s National Audit Office, Indra will deploy an X-ray scanner at the port to check the contents of cargo. Indra made more than $4 billion in annual sales in 2012, with its Latin American operation accounting for about 25% of its revenue.

The Spanish company is one of the main IT multinationals in the region, where it has over 8,000 professionals, eight software labs and 17 Centers of Excellence, which act as advanced R&D laboratories. 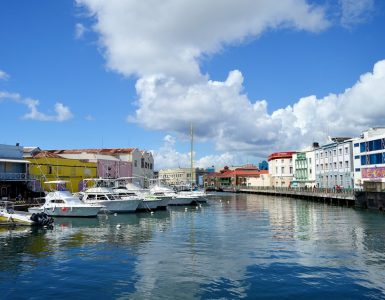 Many countries around the world are reopening at least a part of their economy, but Barbados, a Caribbean country heavily dependent on tourism, says it will keep its airports closed until it feels safe. Prime MinisterRead more

The COVID-19 pandemic has brought Brazil to its knees, but Uruguay and Costa Rica appear to have successfully stopped the virus in its track. Moreover, both countries are developing medical equipment on their own toRead more

The United States exported technology worth US$338 billion in 2019, with the services industry continuing to register red-hot growth. The digital transformation services have been the major drivers of growth for theRead more

Recognizing the Connection Between Intellectual Property and Green Practices

Tec De Monterrey Dean: Reasons to Believe in the Next Generation of Nearshore Professionals