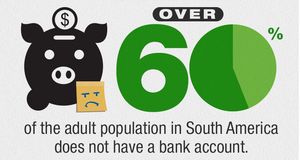 In order for any country or region to fulfill its economic potential it is crucial to integrate as much of the population as possible into the formal financial system. Financial inclusion helps governments to increase tax revenue, enables businesses to reach more clients, and creates an array of opportunities for those at the bottom of the socioeconomic pyramid who for whatever reason have previously been prevented from participating in the financial system.

This is a particularly pertinent issue in emerging markets like South America, where over 60% of the adult population does not have a bank account. Fortunately, the growing availability of affordable technology is creating new opportunities to reach more and more of these people. There is more one cell phone for every person in Brazil and several other South American countries, so the key to financial inclusion lies in utilizing their phones as mobile electronic wallets.

It is encouraging that Brazil and Peru, the most and least financially inclusive countries in South America respectively, have both passed regulation to encourage the development of mobile payment initiatives in the last year. Although Peru is some way behind Brazil, which already boasts a number of mobile payment platforms run by the likes of Telefonica, Claro, Oi and TIM, the former country is currently preparing to launch its own platform which aims to reach one million users within the first 18 months.

A range of similar schemes have been introduced in other countries across the region, while Ecuador has taken an even more extreme approach by announcing in late July the introduction of the world’s first national digital currency. The move will enhance financial inclusion by allowing Ecuadorians to exchange cash for digital money to be stored on their mobile phones, although it is thought that one of the primary reasons behind the launch of the currency was a desire to reduce the nations’ reliance on the U.S. dollar.

With a year-on-year increase of 53%, Latin America is the region showing the strongest growth in number of new mobile money services, according to GMSA. As of February 2014, there were 29 live mobile money deployments for the unbanked across 18 markets in Latin American and the Caribbean. At that time a further 19 mobile money launches were in the works, more than any other region except Sub-Saharan Africa. As a result of these new deployments, the number of mobile banking users in Latin America is expected to grow by 65% both this year and the next.

However, there are still a number of significant challengers to overcome. Limited financial literacy and the cost of reaching out to rural communities are the two biggest obstacles to financial inclusion in South America, according to respondents of a 2011 survey by the Center for Financial Inclusion at ACCION International. A lack of cooperation among networks was also considered a significant barrier to the expansion of mobile banking in South America.