Just 200 kilometers north of Mexico City, Queretaro is rapidly diversifying away from manufacturing and into the type of knowledge-driven economy that IT services vendors and telecommunications firms often look for.  Three announcements in recent weeks aptly highlight the region’s push for domestic and foreign investment in the tech services sector:  France-based outsourcer Atos is in the process of confirming a new facility set to house 300 programmers and support specialists (Nearshore Americas is the first publication to report this publicly) ; Telmex cut the ribbon on a 160 million dollar expansion of their Queretaro data center; InteQsoft the region’s tech industry cluster association also confirmed that construction is well underway for Q-Smart City, a 500-hectre planned development set to foster the city’s technology and creative services sectors.  Despite this investor momentum, we ask how growing competition for skilled workers across most sectors of the local economy will impact the city’s long-term cost competitiveness over markets like Guadalajara and Monterrey.

An elaborate stone-era aqueduct dominates the Queretaro skyline as an emblematic symbol of the city’s rich history and convergence with modern-day global industry.  Companies like Bombardier, Samsung Electronics, Daewoo, General Electric, Siemens, and Procter & Gamble have settled here, bringing with them jobs and funding toward the city’s modern transportation, energy, and telecommunications infrastructure.  The residents of Queretaro also pride themselves on a rich quality of life afforded to them by museums, parks, and Spanish colonial architecture.  Moreover, the absence of the intense drug violence impacting other parts of the country bodes well for both young professionals and foreign direct investors.

Nearly 40 percent of Queretaro’s workforce is employed in manufacturing across production, management, and administration.  This is the main source of Queretaro’s pool of transferable talent.

Q-Smart City is the latest bold new public-private initiative that aims to erect a 600-hectre planned mixed-use development for companies and knowledge-class professionals looking to work, live and play under a common vision of ‘tech innovation.’  Situated just east of the city center in the municipality of Maderas Q-Smart City hopes to one day be more of a tourist attraction then the run-of-the-mill business park.  Something to the tune of Universal Studios, “visitors will come here to experience and interact with technology,” stated Alfredo Lango the vicepresident of InteQsoft.  Some shortlisted companies include New Art Digital, Momo Studio, InTv México, Loco Films and Imagination Films.  “We already have developers constructing the infrastructure, main street access and the first group of green houses.  We are planning next stages including the IT centre, University, Hospital and Animation Studios”, explained Jorge Buitron director at InteQsoft.

Q-Smart City underscores the intensity with which local and national stakeholders are promoting Queretaro as a high value, knowledge-driven economy – and with some good reasoning.  Global companies like Ericsson and Telmex have already planted themselves knee-deep into the market.  Last month Telmex inaugurated a massive 160 million dollar expansion of Triara, their state-of-the-art data center now capable of providing cloud-based solutions to their enterprise customers.  Telecommunications infrastructure giant Ericsson has also committed to opening a new engineering center of excellence that will in the coming years employ up to 900 engineers.

IT and business process outsourcing vendors are also eying the region. While no official statements have been made, French based company Atos is in the final stages of opening a new service center with approximately 270 postions – 85 percent of which would be technical.  Some domestic Mexican firms including Praxis also have operations in Queretaro, serving mainly the Mexican market.  English speakers here are in high demand and command competitive salaries, which cancels out Queretaro for lower-skilled customer support for English-speaking markets.  While larger vendors like Praxis have their hands full with Mexican clients, nearshore-focused IT services firms like Software Nextdoor are having relative successes in servicing US clients from Queretaro – albeit on a smaller scale.  “Our team of 20 engineers are travel-ready and are very excited to be working on projects in the United States,” explained Hector Teran the General Manager of Software Nextdoor’s Queretaro operations.

Proximity to D.F. Makes Up for Queretaro’s Smaller Labor Pool

Queretaro is home to 1.8 million people but its relative proximity to Mexico City has helped attract mid-career and family oriented professionals seeking refuge from the grit and stresses of nation’s capital.  Adriana Garcia Regional Director of Mexican IT services firm Praxis noted that many of their 200 engineers were recruited out of Mexico City.  “Queretaro is only two and a half hours away from Mexico City (D.F.) so professionals see it as an opportunity to still stay close to friends and family, but live a higher quality of life.”

This is the case for both younger career-driven professionals that will take lower pay for a more senior-level positions (wages are 20 percent lower than in DF) that would normally be out of reach in Mexico City, and for more senior-level developers with families and hopes for a healthier work/life balance. While the labor pool in Queretaro proper is considerably smaller compared to other IT services hubs such as Guadalajara and Monterrey (see figure), companies can draw from talent in the surrounding area.  Educational obtainment also exceeds the national average and other population centers, according to data from the National Institute of Statistics and Geography.

Manufacturing & Aerospace a Stepping Stone for Global IT Services

A somewhat healthier U.S. economy, rising labor costs in Asia, and a growing domestic consumer market is driving Mexico’s manufacturing sector to new highs in both investment and output.  Exports in 2012 (excluding oil) are already up by 12 percent from 2011, according to data from the Bank of Mexico. Foreign direct investment to Mexico from the European Union has picked up dramatically with countries like the Netherlands and Spain investing more than five billion dollars in 2011.  Close to forty percent of total FDI went to the manufacturing sector.

IT services firms now operating in Mexico have tended to co-locate in regions with high concentrations of manufacturing activity.  Years of foreign and domestic investment after 1993 and the signing of the North American Free Trade Agreement has helped transform cities like Monterrey, Guadalajara and now Queretaro from largely agriculture-based economies into modern industrial hubs.

Subsequent demand for IT services – particularly in ERP implementation – seeded Mexico’s IT/BPO industry now valued at 13 billion US dollars.  Electronics manufacturing in Guadalajara paved the way toward professional services as middle managers and IT infrastructure gurus looked for new career opportunities and challenges.  Monterrey-based Neoris is Latin America’s only SAP Global Partner with a vast majority of their client base in manufacturing.

Nearly 40 percent of Queretaro’s workforce is employed in manufacturing across production, management, and administration.  This is the main source of Queretaro’s pool of transferable talent.  As the technology services market grows, both vendors and economic development groups should look toward synergies between advanced manufacturing, educational institutions like UTEQ and technology firms like Praxis (perhaps Atos) to help shape a truly competitive and well-defined tech industry cluster.

Workforce Management (WFM) can be the make or break for BPO operations. Not having a functioning WFM team central to the company’s operations is going to mean one thing: revenue lost – after all, the ultimate goal... 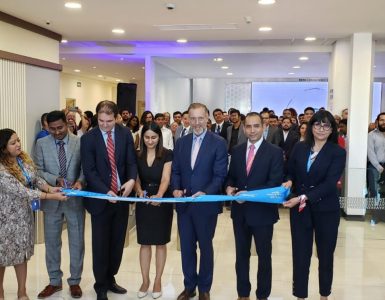 Tata Consultancy Services (TCS) Latin America officially inaugurated this month a new 100% agile delivery center in the City of Querétaro, Mexico as part of the company’s global goal of adopting agile as an...