The Automation Threat to Nearshore

In 2013, a pair of Oxford University economists found that a whopping 47% of jobs were at “risk” of displacement due to the coming computerization of the U.S. labor market. Alan Winfield, a professor specializing in robotics who spoke this week at the global economic summit in Davos, Switzerland, recently put this fear into words in an interview with Bloomberg. “If some of the predictions about tech and employment come true, then we should all be worried,” said Winfield. “There need to be solutions.”
From a global perspective, one of the industries that will feel the most pressure is the BPO and IT domain. The threat is particularly menacing to offshore markets that have relied principally on low wages to win outsourcing contracts.
Business Rationale vs. Historical Reality
There are two competing narratives here. The first is the transformative power of technology when it comes to business processes and IT outsourcing. The ratio of human-powered work to automation-based delivery can — and will — shrink. A report by management consulting firm A.T. Kearney concludes that nearly all the processes can be done cheaper and more efficiently through software-generated means. A.T. Kearney estimates that robotic process automation can yield cost savings of 25%-50% for many business processes.
The second narrative is the historical record. This isn’t the first time we have been told the world will be upended by technological change. In fact, such warnings have been a part of each industrial revolution going back to the first, when the Luddites attacked the weaving machinery that displaced England’s textile weavers. Later, in the wake of the Second Industrial Revolution, Cambridge economist John Maynard Keynes anticipated more pain on the way for workers. He predicted wholesale unemployment, what he termed “technological unemployment,” for those whose hands competed against machines to produce the same goods. Economies would power along thanks to a larger set of machines, he projected, while restricting the role for human labor to one of oversight of the machines and the provision of services.
So where are we this time? Is one technology bound to change outsourcing as we know it? And where does the nearshore fit in?
The Nearshore Challenge from Automation
Latin America is not immune from the disruption of digital transformation. Although business process and IT operations in Latin America rely less on wage arbitrage in order to win outsourcing contracts — instead coupling cost savings vis-à-vis the United States with the draw of strategic geography — BPO in the region remains a human-intensive enterprise. Repetition of tasks characterizes business processing across much of the region, putting many workers at real risk of losing their jobs to automation. The firms and markets most reliant on low cost as a differentiator are most at risk.
Today, the vendors that have begun incorporating BPaaS (business process as a service) in Latin America so far have done so in a few pockets in the region. But those with established links to major global outsourcers are likely to lead the way in incorporating greater levels of automation. This puts the likes of Mexico and Costa Rica at an advantage because they have a history of completing high-end BPO delivery and they enjoy the presence of market-leading outsourcing firms.
Uruguay is also well situated, albeit for different reasons. Uruguay has never been able to compete globally on the basis of labor cost, and this has created a niche market. Uruguay emerged as a delivery destination for higher-value BPO, so it is now positioned to avoid the disturbing effects of automation by delivering knowledge-process outsourcing (KPO), including legal process outsourcing.
Even with regard to the broader disrupting effect of automation, there’s reason to be upbeat. Talent gels when facing crisis. Think of the formation of social media companies amid the Great Recession. Many Latin American markets are chock full of tech talent, and they can be expected to navigate their way through the digital transformation with innovation. There is a lot more innovation — in all sectors — occurring in Latin America than most know, with companies leading the way on renewable energy and software development to streaming video and water purification.
Some industry firms will follow suit, seizing the opportunity created by automation, while others will sidestep the technology to move up the value ladder and deliver higher-level outsourcing solutions. Because BPaaS erodes the advantage of economies of scale and has lower fixed costs than BPO has had in the past, expect new entrants into the delivery market. As much as anything, automation will open up the field. So while BPaaS may upend staid firms, it will also expand the playing field, making way for new entrants to the game. 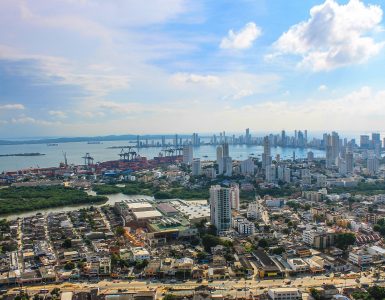 Throughout Latin America, growing tech and startup scenes will be important sources of skilled employment and innovation for promoting economic and social recovery in the aftermath of the catastrophic coronavirusRead more

The Barriers that Hinder the Caribbean’s Nearshore Ascent

The Caribbean has a unique opportunity to attract global services investment migrating from the Asia-pacific region due to the Covid-19 crisis.  The region also possesses a stunning amount of upside, but getting to thatRead more

How to Motivate and Engage with Your Outsourced Teams

While outsourced teams are not officially part of your organization, they do work for you. So in reality, they are part of your team. A change in perspective can unlock their value. Performance is Powered by EngagementRead more